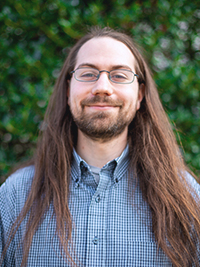 Scott Jones lives in Cottondale with his wife Leah, three cats, one dog, a snake, and a turtle. Scott is originally from near Philadelphia, Pennsylvania, but has been slowly making his way south. He made stops in West Virginia and North Carolina before coming to Alabama. His interests include hiking, camping, monster movies, reading, and many other things. Scott received his Bachelor’s degree in Biology from Shippensburg University in south-central Pennsylvania where he did undergraduate research on cannibalism in caddisflies and salamanders. He received his Master’s degree in Biology from Marshall University in West Virginia where he looked at urban herpetology. His most recent degree was a Ph.D. from East Carolina University in North Carolina, where his research focused on how tadpoles change their shape in response to competitors and predators. His teaching interests include herpetology, zoology, ecology, conservation biology, natural sciences, and the connections between humans and nature.